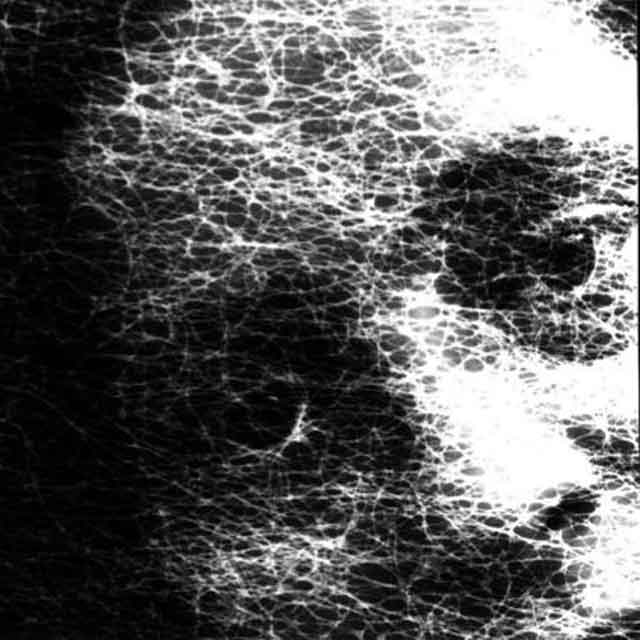 The first book I published was het still (2003), containing forty-four poems, each composed of four words in Norwegian. Each word is put in one of the corners on the square page (18x18cm), many of them with a language-sound in common. The position of the words forces readers to “walk” around with ones eyes on the page, but also gives freedom to choose the direction and order of reading. Any route however would not result in a clear sentence. Each poem may be seen as an invitation to play and participate in creating one’s own reading experience. Thus, the book is an example of how a printed text can make the reader interact, a phenomenon that has become usual in many works of electronic literature that are based on advanced technology.

I regard the book as a basic study of the relation between words and space, which turned out to be a powerful and inspiring start for my first concrete poetry project after a long pause. One of the print publishers I consulted (ca 2001), in a letter commented that this ”sixties-project” was interesting, but that the timing was “a little too early” for this kind of books. Later, Marko Niemi created and published an animated version of het still for the Finnish web-magazine Nokturno (2007).

The book was printed in 250 copies, 100 of them numbered and signed. The title is constructed from the Norwegian word for silence: stillhet.
The cover picture (which goes around) is exposed on a Kodak Tri-x film in a Minolta SRT 101, and developed in my darkroom ca 1991 by using Kodak Lens Paper for the effect, all done by me.
Down on the spine I put a number: 1 – to give the impression that this is the first work in a project. In my mind I was thinking about presenting ten rather different books (so far seven).

het still in printed version is available on audiatur.no