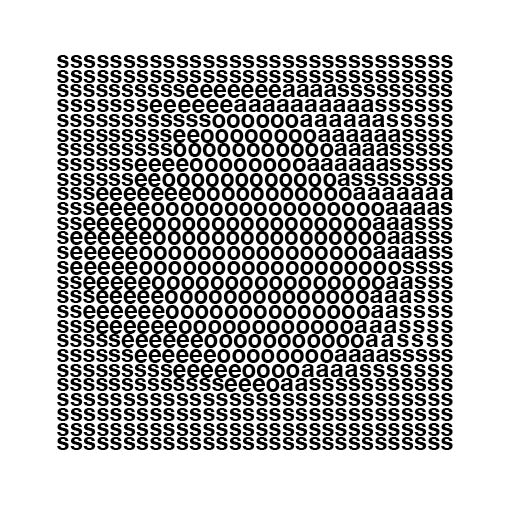 When I published my first books, I exhibited a selection of large-scale prints from the books in different venues, such as in public libraries. The pages were extended to 70 x 70 cm and mounted on cardboards. Later, I decided to buy and work on an Epson 9600 in my own studio making digital prints on cotton paper as graphic art. I created many pictures solely based on letters, which I call “bokstavtepper” (‘letter-carpets’). In 2007 some of these were presented along with a catalogue, the bokstavteppekatalogen (‘letter-carpet catalogue’) in a solo-exhibition at Galleri Briskeby, Oslo. Letter carpets became an essential element in my animated works.

They are mostly created by using the Helvetica Neue Bold font in Indesign where I put the lines tightly together, or vary the spacing of letters to constitute a kind of carpet. So far they’ve been presented in black or yellow, which have been the basic colours in most of my works. The carpets may be built upon a single word in several languages, be based on just one or several sounds, or even a whole sentence with more or less meaning. Usually, it is the vocal quality of a word, or the visuality and shape of letters that define my choices.
This way of taking advantage of digital technology to design the visual patterns and dynamics has become a method I also repeatingly use in my video-poems.

The editor of visual poetry in UBUWeb, Derek Beaulieu, wrote this in his blog Abstract Language #2 010911:

ottar ormstad’s bokstavteppekatalogen (gallery briskeby, 2007) is a real triumph. ormstad has a style which is very traditional, and would not be out of place in some of the classic anthologies of concrete poetry like Solt’s 1968 volume Concrete Poetry: A World View. Despite this traditional style, ormstad’s work uses Indesign to breathe fresh life into this clean form. ormstad’s 24-page collection which varies from lyrical abstractions to beautifully rippling Op Art canvases which undulate in way reminiscent Victor Vasarely’s work. By manipulating the kerning of blocks of texts almost imperceptively, ormstad uses letters to create the appearance of movement. ormstad’s work is difficult to locate, but is worth the effort as bokstaveteppekatalogen exemplifies a simplicity rarely exhibited.

Profile page and prints at the gallery Norske Grafikere